I’ve been remiss in the fact that I have not written about our boat search in a while. I’ve talked about the fact that we took sailing lessons, and that we have been on the hunt for a starter boat. We have done a ton of research, and even went to check out a Catalina 25.

We moved onto the next 2 boats on our list: the C&C and the Watkins. We weighed options, sorted through performance stats. Cruisers’ forums (STOP SOPA!!) and manufacturer sites… sale listings and pictures… Good grief, the amount of pictures we have clicked through! Well, one fine day, Evan came across a sale listing on Ebay for a Watkins 25.

Boy, was she pretty! We had been watching her for quite some time. We were looking at her and researching everything we could about her even before the Catalina had popped up on our radar. We eventually decided to go ahead and drive over a few states to inspect the Catalina, and if that one didn’t pan out then we would seriously consider putting in a bid on the Watkins.

The Watkins was also several states away from us, but she did have a trailer! The fact that the Watkins has everything I could want on a smaller boat including a SHOWER had me drooling. Now, of course, we had done our homework on the showers, too. We found a very active Watkins Owners yahoo group and joined. This site has been phenomenal, y’all!  We knew that many of the owners had issues with some shower leakage, and there were a number of ways offered to fix the problem. There were also several threads going on about replacing and relocating propane tanks, building lockers, what companies can manufacture replacement hatches, reviews on sail mending/cleaning companies, you name it!

Well, after our debacle with the Catalina we were a little hesitant to launch into a bidding war with folks site unseen, but we had a good feeling about this boat. She was pretty. Warm. Inviting. And we wanted her – BADLY! So we got together with a sailing buddy on the final day of the Ebay bidding and got his $.02, as well. We determined how much we thought she’d go for and how much we were will to give. Evan sent out a feeler bid, and we waited.

A few minutes later, another bid came in. Then a few came in, each trumping the bid before it. Now we were a few hours out, and folks started setting their max bids. Some brave soul would bid and 3 or 4 auto bids would race to the top. I was at work and it was excruciating to watch. Soon our max bid was surpassed, and we had to come up with our final offer knowing full and well that the others were all doing the same. Evan set up our final max bid and a snipe. Then we waited.

My heat was starting to race at this point, and I was trying to do my job and not fall out of my chair in the process. My hands were sweating.

Suddenly, I sat watching a bidding war! It looked like someone had taken remote control and instead of the increase volume button they had just held down the increase bid button. The number started rapidly scrolling up and up and up until finally a red victory banner was slapped across the picture of the Watkins:  ENDED.

We did not win.

Whoever did, however, wanted her more than we did, and he PAID for it. The sale price of that boat jumped over $1000.o0 in that last second and a half as all the snipes shot off. Yes, we were sad, but knew that as much as we wanted that boat we were probably better off not getting her. Purchasing a boat site unseen in our youth of sailing was probably not the sharpest of ideas, but we feel very, very confident that she would have been worth it. AND, while she went for a good deal more than we were willing to come off of, we feel that whoever did get her paid a fair price.

We wish you well, Watkins 25 – and your owner, too! Happy Sailing to you both!

Oh! and never fear! Our boat search did not end there! We trudged on through our seemingly infinite world or web searching and found a few more boats that seemed well suited for us. Which did we choose? That, my friends, is soon to be revealed!

What some might call the “granola” side of me is very aware of the energy in our house. Have you ever walked into someone’s house and felt very uncomfortable? Even someone you know well… Maybe you just feel your senses are a touch heightened or maybe you feel the tension in the air? I hate that. I love when people come over to my house. Almost always someone comments, “It’s always so comfortable here. I just feel at ease and happy when I’m at your house.” Well, folks there’s a reason for that!

Just as I work hard to keep the house clean (with 3 dogs, 2 cats and teen aged boys this takes work!), I also work to keep the energy positive in the house. I have a few herbal concoctions (not *that* kind of herbal) that I use from time to time to clear the air. I basically take a few basic herbs/seasonings and boil them on the stove potpourri style. I call them my purification rituals.

A few of my staples in my spice rack for both cooking and aromatic purposes (aside from the typical salt and pepper):

Recently, I noticed that I was running low on lemon peel and lime peel. I can go buy a jar of lemon peel at the store, but it’s kind of stupidly expensive, and I have yet to find lime peel in a jar. SO I dry my own. I had Evan pick up lemons and limes on his way home from a meeting the other day, so I could have the peels. But what I was going to do with the fruit I had not yet decided. I hate to waste things. After a bit of thought I decided to try my hand at Lemon Bars, and while I was at it, why not make Lime Bars, too!

OMG are these to die for!!! If you have any kind of inclination toward citrus or sweet and tart desserts, try these! Or come and get mine. I seriously have to get these damned things out of the house. I think I will take them to work with me today to  pawn them off share with my co-workers. 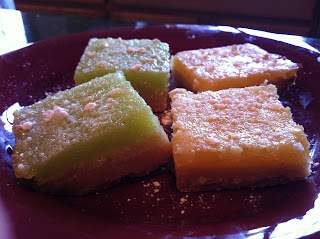 2. Use your hands to mash/blend together butter, sugar and flour for  crust and press out into the bottom of a 9×13 baking dish

3. Bake crust for 20 mins or until firm and golden

4. Whisk together flour, sugar, eggs and juice and pour over baked crust.

5. Bake for an additional 25 mins. It will firm up as it cools

6.Cut into bars, sprinkle with powdered sugar and serve (I prefer them chilled)

For the Lime bars:

Same ingredients and directions except replace lemons with limes. When whisking filling ingredients add one or two drops of green food coloring.